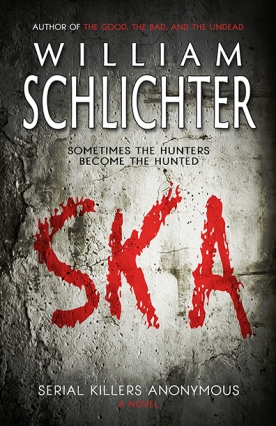 From award-winning screenwriter and author William Schlichter comes a dark and disturbing psychological thriller that poses a simple question: is it possible for a serial killer to stop killing?

Since the 1970s, society has been fascinated with serial killers. But what fuels a psychopath? Imagine being invited into a dark world where secrets are revealed. Hidden meetings in dark basements. Veiled identities. The sharing of the most intimate and gruesome details of each kill. Imagine a support group for serial killers who want to stop killing. But one member of the group isn’t truly convinced. And they will do whatever it takes to end therapy. The hunters are about to become the prey.

About the author: William Schlichter is an award-winning screenwriter and author specializing in science fiction and the phantasmagorical world of the undead. His popular No Room in Hell and Silver Dragon Chronicles series are fan favorites, and he enjoys spending time on the convention circuit.

About the publisher: BHC Press is an independent publisher of general fiction and nonfiction hardcover, softcover, and ebooks for both YA and adults. To learn more about William Schlichter and BHC Press, visit the publisher’s website.