Every legend has a story… Every legacy has a beginning… 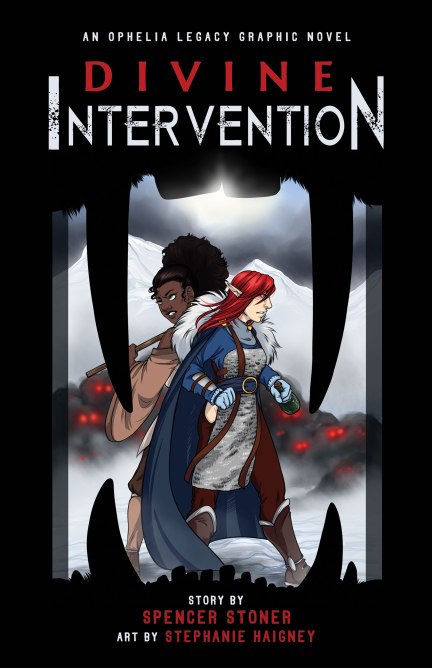 “The Ophelia Legacy series is a dream I’ve had since I was twelve years old,” said Stoner. “Ever since I decided I wanted to be a writer, I’ve had a population of people living in my head. The first to make it to the page in a full-on graphic novel was Ophelia and her pack of miscreants.”

The book also features lush, colorful artwork by debut comic artist Stephanie Haigney. The next adventure in the series, Ophelia and the Rabbits of War is slated for a 2020 release.

About the book: The cleric Narasumas is hunting down a murderer. Having already lost her sister to the ordeal, she needs help. Narasumas needs the best tracker in the region. That would be Appelonia, the now godless young elf woman formerly of the Order of Kuan Yin. Familiar with the barren fields of the Land of the Long-Toothed rabbit, and taught by a legend to survive there, she is perfect.

Unfortunately, there’s a complication: She is already aiding the notorious mercenary known as Ophelia. Ophelia is searching for a barbarian exiled into this frozen landscape and the mercenary, along with the enchanted runes etched into her skin, is disinclined to share.

But divine intervention is coming, and with it will come the destruction of the town and all the innocents living within.

Narasumas must find the criminal before that happens. Before her promise causes every unwary man, woman, and child unlucky enough to be around her to be torn to pieces…

About Spencer Stoner: Spencer Stoner lives in Reno, Nevada. In addition to writing, he is also a black belt in American Kenpo Karate and he is an avid gamer and loves to draw as a hobby.

About  BHC Press: BHC Press is an award-winning independent publisher of general fiction and nonfiction hardcover, softcover, and ebooks for both YA and adults.

To learn more about Divine Intervention and other available BHC Press titles, visit the publisher’s website.