My new novel, The Immortal Prudence Blackwood, explores what really happened to the world’s most notorious unknown serial killers such as Jack the Ripper, The Atlanta Ripper, and the Cleveland Torso Murderer.

I’m excited to share more in-depth details about my characters and the background for how this story unfolded for me. I promise there are no spoilers! 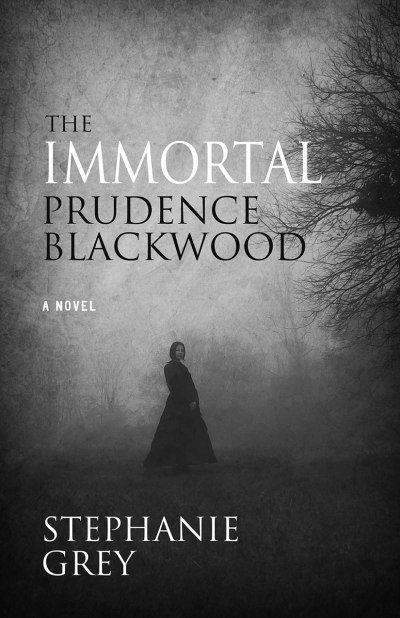 Writing The Immortal Prudence Blackwood was a fulfilling challenge for me in that it’s a dark-themed story whereas I’m naturally a quirky person. I spent almost a year working on it, and finally finished it before the holidays almost two years ago. My cats, Zoe (God rest her soul) and Tabitha, were lounging around the living room with me and were wildly unimpressed when I typed “The End,” jumped up, and started doing a ridiculous happy dance. My husband was away on a business trip, so I was celebrating alone with my cats because, well, why not?

The idea for a story about an immortal who hunts serial killers came from an article I read about a 700-year-old Knights Templar cave. The pictures included were incredible, and it sparked the idea of a woman in the 1700s who stumbled upon it.

I spent a couple of months researching the murderers I wanted to include, as well as the time periods. Hours were spent looking at old maps of the cities included in the book. Most of the locations, even the exhibit on display for one of the scenes that takes place at a museum, are real.

A lot of time was spent looking into the forensics of the time periods, with the most focus on the 1930s and 1940s. It was absolutely fascinating to read about their advances, and knowing what was to come along in the future.

I also researched weapons, both online and by asking questions from friends who are knowledgeable. I stirred up a bit of a debate amongst my friends when I revealed Prudence would be carrying an American-made gun for the scene where she’s in Germany. They wanted her to carry a German firearm, but in my eyes, Prudence would want something made in the U.S, especially for the mission she was on at the time.

For the flavor of the 1940s, I interviewed my grandmother. She was nine when the “present day” portion of the story is set, and her information was instrumental in getting the details just right. I truly had such a wonderful time listening to her memories of being a child then, and marveled at how much the world has changed in the last 70 years.

With my research completed, it was time to focus on my characters. In the beginning, the only fictional characters I had were Clive O’Reilly and Prudence Blackwood. Their names are written in a red spiral notebook with about a paragraph of details next to them. Those details include their ages, birth years, physical traits, and personality traits. As the story expanded, more items were added, such as the vehicles they drive, family relations, etc.

At one point, I read a review where the reader said I must have a lot of pages of information about Prudence and I had to laugh. I wasn’t laughing at the reader by any means, but more at myself. I’m such an organized person, but when it comes to writing, I’m a pantser all the way. A pantser is someone who goes in with an idea and a few key elements, but that’s it. I tried being a plotter once because I’d seen so many people in my writers’ group going that route. I came up with back stories for each character, and even an outline for the entire book. At that point, though, I was so bored because it didn’t feel organic. That project is still shelved.

Clive O’Reilly is an old-fashioned gumshoe. He was going to be a by-the-book person, and solve the murders in D.C. with hard work and experience. Andy West was created as someone to mentor O’Reilly, and, while he’s a small supporting character, I loved writing his lines. O’Reilly is a great detective, but West is still teaching him there’s more to the job than what O’Reilly thinks there is.

He needed more than the murders to focus on in his life, thus the creation of his family. His son, Frankie, is based off a mixture of my own nieces and nephews. O’Reilly’s interactions with Frankie and his ex-wife, Edith, were based off interactions from my own parents, who are also divorced and still friendly to each other.

I didn’t intend to include a romance, but when Sharon Elliot popped up, it simply felt natural for the characters to pursue a relationship.

Prudence Blackwood herself was the most interesting to write. The woman is, in my eyes, phenomenal. She’s an immortal, intelligent, and highly skilled, yet she’s not someone that I wanted to appear to be intimidating. She’s petite with long, dark hair and bright green eyes. People don’t see her and assume she’s a threat.

I wanted her to remain a bit of a mystery, which is why I chose not to write from her perspective that often. Instead, I wanted to write her as others saw her. She’s a woman who struggles with morality in that she wants to be a good person, but violence comes so easily for her, and it’s hard for her to accept that.

I purposely didn’t include much of a background for her before she meets Jack the Ripper, however, I promise for the next installment, there will be more details regarding Prudence.

I’m extremely proud of this novel. Holding the proof in my hands almost two years after the final words were typed was one of the happiest moments in my life. Writing isn’t easy. It requires discipline and ambition. However, it’s what happens after the story is finished that is the most difficult. Finding a publisher is a long, dogged process and I’m unbelievably grateful for BHC Press for taking a chance on me and accepting Prudence into their world.

To my dear readers, I hope you enjoy The Immortal Prudence Blackwood!

About the author: Stephanie Grey is a graduate of East Tennessee State University with a degree in journalism. Writing has always been present in Stephanie’s life. From a young age, she has been writing short stories for her family to enjoy. When she entered high school, she decided that she would one day write a full-length novel. She finally achieved her goal and is the proud author of three novels, including The Immortal Prudence Blackwood. She continues to write and hopes to be able to share her stories with the world for many years to come.

About The Immortal Prudence Blackwood

Throughout history, the world has witnessed cruel, gruesome, and twisted murders at the hands of the most notorious serial killers. For those who were never caught—Jack the Ripper, the Atlanta Ripper, and the Cleveland Torso Murderer—their crimes will live on in infamy as their identities are forever chased, but never revealed.

It’s 1947 in Washington, D.C. and a dangerous murderer has boldly discarded two headless bodies nearby the White House and the Jefferson Memorial. With no leads, Detective Clive O’Reilly is feeling desperate. When a stranger convinces O’Reilly to join him at a local pub, he is treated to a wild tale about Prudence Blackwood, an immortal who seeks vengeance for those murdered by history’s most notorious serial killers.

Initially in disbelief over her existence, O’Reilly is surprised to discover that she’s very real and she’ll be assisting in the investigation. But Prudence has unorthodox methods. With the body count rising, O’Reilly will have to find a way to work with her to stop the most brutal killer in D.C.’s history before more victims are added to the list.

Read an excerpt of The Immortal Prudence Blackwood

“Grey did…a fantastic job of creating the character of Prudence Blackwood. It was refreshing to have a strong and powerful female lead that appeared normal to the outside world, rather than looking like a superhero. I absolutely loved this book, and would highly recommend it.” —For Books Sake book blog

“…sucks you in and keeps you hungry for more until you reach the mind-blowing ending.” —Gwendalyn’s Books Blog

“…a very entertaining book. The story was different and, really, quite clever.” —Sheryle Gouker, Librarian

“I had a very hard time putting this one down.” —Randee J. Bybee, Librarian

“…this book did not disappoint. It did, in fact, live up to everything that I thought it would be.” —Books, Tea, Healthy Me Book Blog

Fans, readers, and librarians/retailers: Be sure to download your free digital promotional pack, featuring

For more information on The Immortal Prudence Blackwood and other available titles from BHC Press, visit our website