Book Release Spotlight: Anxiety, Yoga Poses, and the Lost City of Atlantis—Author Amy Kuivalainen Gets Up Close and Personal on the Inspiration Behind Her New Fantasy Release THE IMMORTAL CITY

Author Amy Kuivalainen shares the inspiration behind her new release, The Immortal City.

The Immortal City is out in the world at last! I wanted to share a bit of background and inspiration for the main players in The Immortal City, Penelope and Alexis. Don’t worry, I’m going to make these as spoiler free as possible, while giving you a bit of insight into who they are and how they wandered into my brain and developed into the characters you’ll meet in the book.

On sale now at your favorite booksellers, including Target, Barnes & Noble, Waterstones, Amazon, and more! Visit our website for more information, or to purchase direct from BHC Press or other retailers. 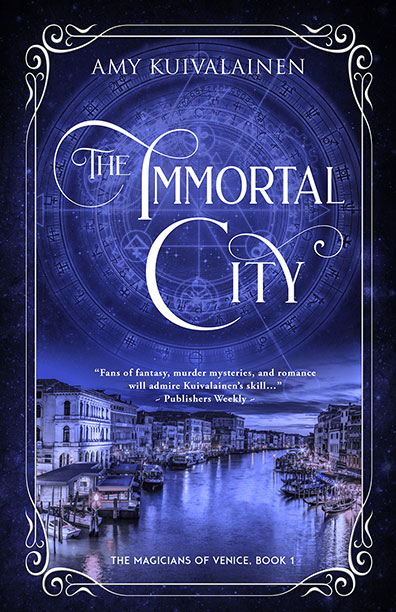 I had been thinking about writing an Atlantis book for a while, and having a female archaeologist as my protagonist, and I’d been working for universities/academia and had an insight into the daily struggles but didn’t have a feel for her just yet. Then life got in the way.

I’m not a sharer, but I’m comfortable enough to say I was not in a good place anxiety wise in early 2017. My workplace wasn’t a healthy one so I knew that it needed to change, and I was locked into a contract until May and thought I could keep it together and wait it out. In April, I started having public panic attacks. In restaurants that were too crowded, on the train going home from work etc and then as I sat holding in tears in the bathroom of a stranger’s house, at a party I’d been convinced to go to…there was Penelope. Anxiety filled and in the darkest place, feeling like a failure and unable to even control her own mind and body.

I started writing her, and I felt like if I could write a character and how she dealt with her anxiety, maybe I could figure out my own. Pen was doing yoga and meditation, so I got back into it and man, has it helped on so many levels. I’m not saying Penelope is a reflection of me, or that her triggers are the same, but writing her struggles as I went through my own was therapeutic. It still is. I wanted a character who had the panic attacks and anxiety, but still got up and did what she had to and manage it as best as she could. I wasn’t thinking of an audience at the time I planned and wrote The Immortal City, I was thinking how as a reader I don’t see people with anxiety being the heroes. Yeah, sure, there are some that I’ve found where the character has anxiety, but it tends to mysteriously get cured pretty early on when they find the right man/place they belong/the ‘source’ of their anxiety like magical interference. I’m going to tell you right now—Penelope’s anxiety doesn’t go away through the whole series because you don’t get cured of that shit, you only learn to manage it. 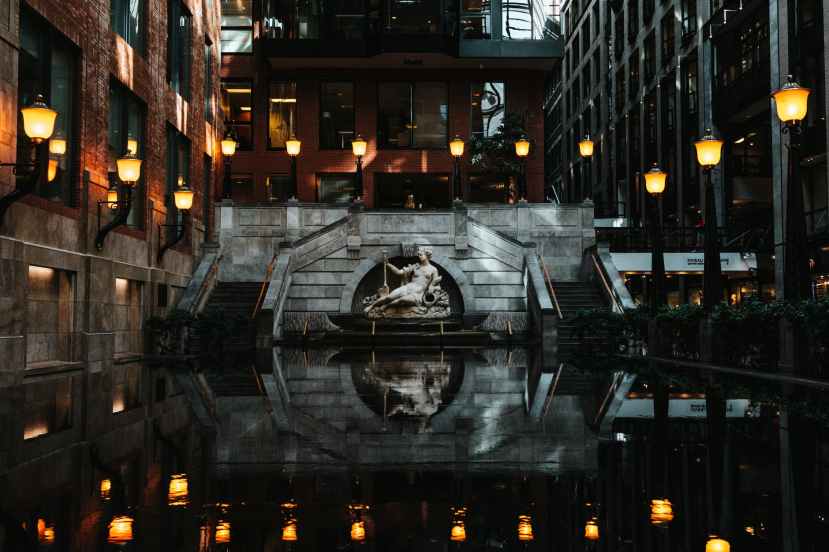 Photo by Louis on Pexels.com

Penelope has an impossible dream—to find the historical Atlantis. This dream has shaped her life in all aspects as a daughter, an academic and as a woman. It’s impacted her relationships and drives her waking moments. I wanted a character to get a glimpse of achieving that dream and having it taken away, her hard work and research panned, and her grant money gone. I work in a creative industry, so I know a little bit about having the impossible dream, especially when it gets trodden on. I was also working closely with academics and seeing firsthand how they spend so much of their professional life trying to get grants, publish articles and get recognition for the work that they do and have the means to continue it. I’ve seen people burst into tears when they’ve been denied grant funding because it means they have to leave their research and go back to teach in order to pay the bills. I’m not saying that there’s something wrong with teaching or it’s a lesser vocation because it’s not, but I wanted to share this side of academia because you never see Lara Croft or Robert Langdon being forced to say no to an adventure because they don’t have the cash or means of obtaining it.

Penelope is absolutely the kind of person obsessed with her dream enough to leave her holiday to go to Venice because something pertaining to her research has turned up at a crime scene. While I don’t like to inflict talk of ‘themes’ onto readers, obsession in all its forms plays a big part in the Magicians of Venice series, and nearly every single character in is obsessed with something.

Okay, I don’t think I can say tooooo much more about Pen without giving out spoilers apart from adding she’s an Aussie and an only child. For a bit of fun, I’ve created a yoga flow for her that you can find below. It’s not intensive, as she uses yoga to calm down, and I’ve enjoyed putting this one together for anyone who’s interested.

FYI: I’m not a yoga teacher, this is for fun, please practice safely.

(ten rounds, 3 breaths for each move)

Alexis Donato started as a dream.

Before I had Penelope, I had Alexis. Penelope made me work to see her character and her motivations clearly, Alexis was a god damn freight train of ‘Here I am. Try to understand me at your peril. No, I’m not changing because you want me gentler, or easier, or less complicated.’ Alexis turned up in a dream, in fact a bunch of dreams. And yes, I know how lame this sounds, and yes, just because I had a cool dream doesn’t mean it makes a cool story. Dreams can be pretty bullshit but bullshit fertilises. 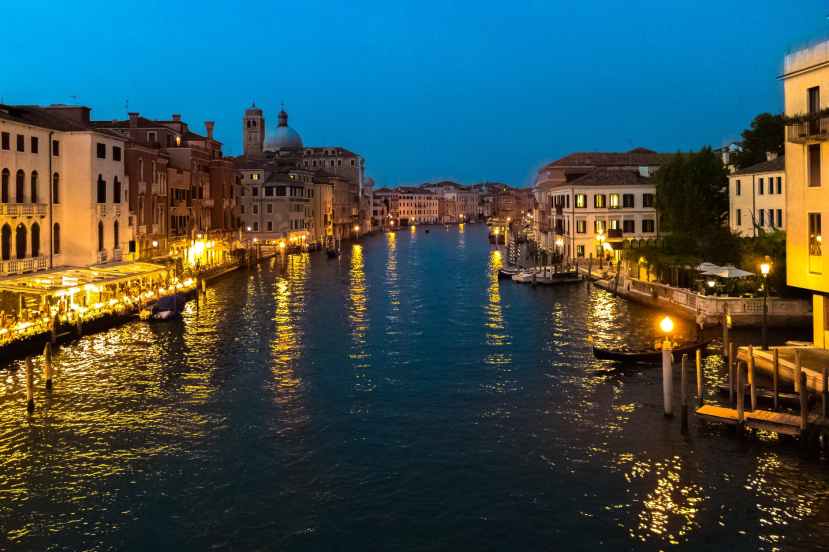 Photo by Nextvoyage on Pexels.com

Dream 1, came about as all of the Atlantis and research primordial ooze was percolating in my brain. In the dream I knew I was someone else. I wasn’t *me* but I was in Venice at night and someone stepped from the shadows and stabbed me as I was admiring the view from a bridge. I toppled into a canal and when I came to, I was in a stranger’s house and that stranger was Alexis, who told me he was a magician from Atlantis. For those who’ve read The Immortal City this scene may seem familiar although not in this form. It’s because I couldn’t leave this moment out of it.  Alexis had arrived and I woke up thinking I really shouldn’t eat so much before bed, but this character refused to go away. The following week I had about three different dreams including having coffee with him in the San Marco piazza. The bastard wouldn’t leave me alone and I knew in my bones I had one of my main characters. The weird thing was, once I had Alexis, every bit of random research I had scattered through notebooks all clicked into place. He was the keystone, the spider in the web, and the plot connected in the most surprisingly creepy way. Writing this series has been like that from day 1 and even now I’m in my third book things keep connecting randomly.

Alexis is a great character and one of the most fun I’ve ever gotten to write. I love writing about magicians and magic in general, so building the myth of Atlantis up around Alexis and the other magicians was such a blast. His duty has been to protect the other magicians and prevent mankind from learning the truth about Atlantis, so you can imagine him butting heads with Penelope who’s determined to discover the truth. He’s a general, a big brother, a son and he does his best to keep the other magicians in line. I really loved being able to use him as my storyteller, and crafting mini stories and memories was a way I could go to Atlantis without losing the book completely to full fantasy territory. Alexis has lived a LONG time, and there’s so much room as a writer to play with and use to develop layers and motivations.

I recently saw a reviewer describe Alexis as ‘part romance, part violence’ and its pretty spot on. He’s a scholar and a warrior. He doesn’t always play well with others but he’s loyal and fierce and damn charming when he wants to be. I’m shamelessly in love with Alexis. I’ve also created him a yoga flow because the poor guy has a lot on his hands.

Developing Penelope and Alexis was night and day by way of process, but I love them both like crazy. They’ve really pushed me as a writer and have helped me through the last few years of anxiety and growth.

I hope you love them as much as I do! 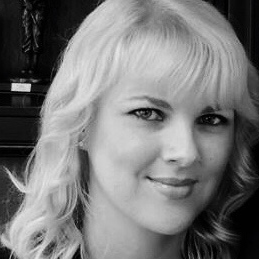 About the author: Amy Kuivalainen is a Finnish-Australian writer who is obsessed with magical wardrobes, doors, auroras and burial mounds that might offer her a way into another realm. Until that happens, she plans to write about monsters, magic, mythology and fairy tales because that’s the next best thing. Amy is the author of The Magicians of Venice series, The Firebird Fairytales Trilogy and The Blood Lake Chronicles series that mash up traditional tales and mythology in new and interesting ways.

About The Immortal City

Dr. Penelope Bryne is ridiculed by the academic community for her quest to find the remnants of Atlantis, but when an ancient and mysterious script is found at a murder site, she flies to Venice determined to help the police before the killer strikes again.

Read an excerpt of The Immortal City

Praise for The Immortal City

“Magic. Mystery. The Lost City of Atlantis. What more could you want? Amy Kuivalainen has truly impressed me with the amount of research that went into this book. Her approach to explaining the theory of Atlantis is unique and captivating.” —The Book Lyst

“…an exciting and page turning novel which draws from many influences to create a new take on the Legend of Atlantis.” —Crime Classics

“…combines both present day Venice and the myth of Atlantis flawlessly. Full of mystery, danger, intrigue, magic, and romance… I anxiously await the next installment.” —Just Jaime’s Reviews

“I loved this new take on the lost city [of Atlantis]. The addition of magicians was brilliant. The heroine was smart and strong…the book was filled with magic and took a legend and [turned it on its head] in a wonderful way.” —The Book Dragon

“…diligently brings the real world into fantasy, in a breath-taking way.”  —Radzy Writes and Reviews

What’s next in The Magicians of Venice series?

The thrilling story of Penelope and Alex continues in Sea of the Dead, book two of The Magicians of Venice series, available fall 2020 from BHC Press.

For more information on The Immortal City, including where to purchase and a free digital promo pack with posters, visit the BHC Press website.

Visit our website to learn about more of your favorite titles available from BHC Press.