BHC Press is pleased to announce their six contenders for the 2020 Pushcart Prize. This prestigious award is highly regarded by the trade for their commitment in honoring small and independent presses’ outstanding books and writers.

The awards have been in existence since 1976 and are awarded each fall. The upcoming 2020 awards are for works published in 2019.

Congratulations to all our authors and their nominations for the 2020 Pushcart Prize! 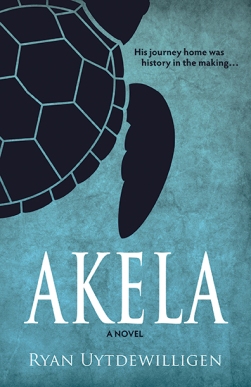 Forrest Gump meets Woody Allen in this endearing story about a sea turtle seeking to be reunited with the love of his life.

When Akela is separated from his migrant soulmate, Kalea, he will do anything to be reunited with her. Journey with this charming and neurotic sea turtle as he crosses paths with celebrities, politicians, and other moments in history with unbreakable determination to be reunited with his love.

The Butterfly by Paul M. Hedeen

In THE BUTTERFLY, Paul M. Hedeen takes us back to the fall of 1963, a few weeks before President Kennedy’s assassination. An obscure émigré Russian professor dies of a stroke—or so it is believed. The professor’s eccentricities and complicity create both mystery and jeopardy as his documents lead his student backward into a century of famine, political terror, and war and forward into a bewildering underworld of malevolent opportunists, unstable identities, and improvised histories.

When the student falls in with the troubled daughter of the Nazi elite, she becomes his lover, guide, and tormentor as both are irresistibly drawn into the dark aftermath of World War II. Memoirs, fairy tales, fiction, and scenarios interweave and reveal the postwar fate of Eva Braun and secrets concerning the famous Holocaust photo, “The Last Jew in Vinnitsa.”

Praise for The Butterfly

“Humanity’s story zooms into unexpected and shadowy directions while Paul M. Hedeen, our remarkable sleuth, trails those diverging and converging footprints, unveils elusive road signs, and sneaks up on secrets that have hidden behind terror, unease, sighs of relief, and love.” — Carolyn Chute, Guggenheim and PEN award winner
and author of many best-selling novels, including The Beans of Egypt, Maine

“The Butterfly is a novel that does not blink. It tells of the experiences of prominent Nazi figures, like Eva Braun, and it envisions how the experience of WWII was felt by characters long after the war’s end. This is a book that not only accounts for how Nazism came to be but can imagine how it has never quite left us. It is an unsettling and powerful novel.” — Jim O’Loughlin author of Dean Dean Dean Dean

The Green Years by Karen Wolff

When eight-year-old Harry Spencer’s father returns from WWI with a missing arm, his father’s bitterness shatters their relationship. Though confused and brokenhearted, Harry is determined to make something of himself. Endeavoring with heart and sometimes-humorous results, he sets out on his path in life, working in his granddad’s store, selling medicinal salves, washing windows, and falling in love.

This historical coming-of-age story set against the backdrop of small-town life will tug at your heartstrings as Harry discovers who he is, who his father is, and how to heal the past.

Praise for The Green Years

“…an entertaining story featuring an entrepreneur and dynamic young man who seems the personification of the American Dream.” — Maria, Goodreads and NetGalley reviewer 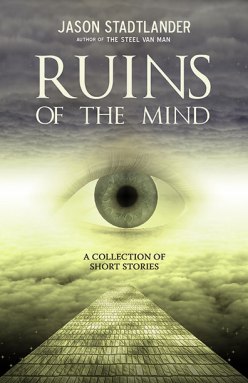 “The Lantern,” short story in Ruins of the Mind by Jason Stadtlander

In Ruins of the Mind, Jason Statlander examines friendship, love, family, tragedy, and American culture throughout this collection of contemporary short fiction. Crossing genres of science fiction, fantasy, mystery, and suspense, his poignant words touch on—and make us question—what it means to be human, the ups and downs that connect and affect us all, and how family is the rock that will get us through.

The Lantern: When a mysterious repairman places a new lantern at a rest home for the elderly, life begins to change for all the residents who live there

Other stories in the collection include: The Ter’roc: Fourteen-year-old Heidi seeks adventure and makes the discovery of a lifetime when she follows her curiosity through a storm drain. Surviving the Messengers: Ashley and her father Chris are dealing with the loss of her mother and need to find the strength to battle a fantastical foe. In the Shadows of a Moment: Five-year-old Frankie sets off for a birthday party on a rainy day with his father Howard, and the ensuing day leads to a shocking discovery.

Also included in the collection: Feathers in the Wind, Downward Spiral, Springtime Roses, The Glass Pyramid, Chance—”Don’t Lose Your Head,” The Sheadroch, The Talasum, and The Journals.

Praise for Ruins of the Mind:

“…one of the best collections around…[the author] writes with intelligence and passion…I just love this book!” — Kath Middleton, Goodreads

“Each story is unique and well written. Be it hidden worlds, courageous battles, or mystery, all are great reads.” — Carrie Webb, Goodreads

BB Danser, the patriarch of the eccentric and zealous Danser family, narrates his life story in View Finder. Set during Hollywood’s Golden Age of greed, corruption, and scandal, his memoir is one of madness, passion, murder, and his desperate, lifelong effort to escape the confines of real and modern life.

The son of the famous actress Elizabeth Stark, BB is caught in the middle of his parent’s tumultuous relationship and his father’s crushing megalomania and jealousies. Desperate to escape, he becomes obsessed with movie cameras and cinematic storytelling, becoming transfixed with the metaphorical question: Is it better to view or be viewed?

A roller coaster story of hope and vision, BB searches for the truth about himself and his family in a world of industrialized fantasy making.

“…reads like a Luis Buñuel screenplay adaptation of a Shirley Jackson novel by way of Sigmund Freud, digs into the reader’s forebrain and refuses to go away.” —Lynda, LibraryThing Early Reviewers 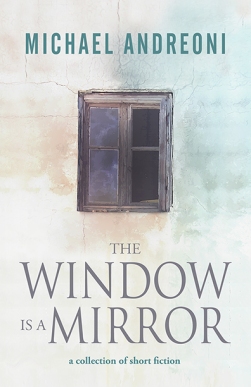 Michael Andreoni examines the working-class life in this collection of sixteen short stories. Written with grit and touches of humor, these thought-provoking stories offer an insight into the flawed and intriguing humanness within us all.

The Window Is a Mirror: A maintenance man is offered his own TV reality show and discovers it’s not what he imagined.

Highlighted stories in the collection include:

Edwin Floating: Edwin and his sister confront the dark history that led to their divorces.
Drambuie Tam: When a diminutive female miner comes down the mountain looking for more than a drink, the town of Argent Springs will never be the same.
Julian’s Crunchy Apotheosis: An ambitious advertising executive is transformed into a dark god who can sell anything to anyone.
Moving Day: A small-town criminal is obsessed with getting out of a too-small town.
Fifteen Tops: A genius software developer is convinced the country would run better if everyone listened to him.

Other stories included in the collection:
Stump, The Window Is a Mirror, Edwin Floating, Drambuie Tam, Julian’s Crunchy Apotheosis, Pastoral, Possum Haw, Moving Day, Brown Black No Ink, The Devil-Ape of Goma, Consolidated Freight, Fifteen Tops, Soft Power, The Symmetry of Children, Tea Party, and The Approach to the Bridge.

Praise for The Window Is a Mirror

“With humor, grace, and lightning-quick prose, Andreoni tells the stories of loan-sharks, angel-headed bakers, and panther-riding gunslingers. A dark and beautiful collection of 21st century ballads.” — Alexander Weinstein Award-winning author of Children of the New World

“Gritty, unflinching, powerful, daring, deft. These words come to mind when reading Andreoni’s startling and clever collection of stories. He gives us razor sharp insights into flawed and intriguing human beings who struggle to survive, deal with the truth (or not), and wrestle with stuck-ness and futility. Each story becomes a window mirroring back to us the different shades of light and darkness, and some have a touch of magical realism. But the surprises keep coming. The characters feel trapped but still find ways to live another day. And we walk with them, and hope with them too. As one of them says, after a series of harrowing events— “born new into darkness, could you imagine light?”
— Zilka Joseph, Author of Sharp Blue Search of Flame, What Dread, and Lands I Live In

Visit our website to learn more about these and other available books from BHC Press!