Ellen Alexander, author of the fun middle-grade mystery series The Dinswood Chronicles, discusses her new novel, The Missing Mortals, and shares more info on the characters,  Dinswood Academy, and what’s next for the gang! 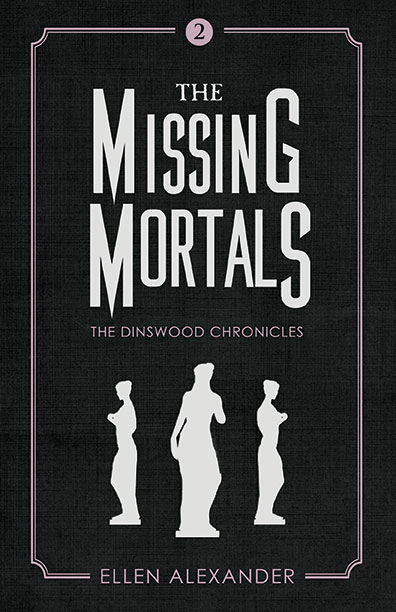 About the book: Emma and the gang are back in their next adventure at Dinswood Academy as they search for a group of missing statues to solve an age-old legend.

Emma and the gang attend Dinswood Academy. Tell us more about their school:  Dinswood Academy is a castle that was left to the state by its owner, Lord Percival Dinswood, to be used as a boarding school for grades 7-12. Well known for its high academic standards, the school sits in relative isolation up in the mountains. The school is surrounded by Fangorley Forest and is famous for its picturesque scenery. Although the castle was extensively renovated so that it could serve as a school, it still retains some of its original features including a ballroom with marble floors and columns, a well-stocked library, an enormous lounge, and every room has a fireplace. The classrooms and student lockers are on the second floor and the teacher and staff residences are on the third floor. As part of the renovations, two wings were added to serve as dorms for the students. The east wing, Bingham Hall, is the boys’ dorm and the west wing, Brimley Hall, is the girls’ dorm. A brand new gymnasium sits behind the castle and completes the square. In the center of the square is a little greenhouse used to grow flowers and poinsettias for the school. Originally constructed in the early 1700s, the castle has numerous secret passages. An intricate network of natural caves and tunnels also exists beneath the castle.

How would you describe Emma and Lord Dinswood? Unlike the majority of students at the academy, Emma does not come from a rich family but is attending the school on a scholarship that she won. Although she feels inferior at times, Emma is smart and courageous. She has a strong moral compass and always tries to do what is right no matter what it may cost her.

Lord Dinswood is a generous man with a gruff exterior that hides a warm heart. He values the qualities of intelligence and integrity in others and has a great love of adventure.

Who are the missing mortals? Although the second book in the Dinswood Chronicles is a story about Emma and her friends, it also tells a story from the past—the story of Darius Dinswood and his wife, Rebecca. Darius loved Rebecca more than life itself and over the ten years of their marriage, he commissioned the famous sculptor, Luciano Marnatti, to sculpt seven pieces for her. The sculptures were women of the Bible who Rebecca admired. Marnatti referred to them as the mortals. When Rebecca died unexpectedly after the birth of her first child, the mortals mysteriously disappeared. Legend had it that Darius destroyed them in a fit of grief. Three centuries later, one of the sculptures is discovered while digging the foundation for the school’s new gymnasium. Convinced that the other six mortals also survived the centuries, Lord Dinswood, descendant of Darius Dinswood, gives Emma and the gang the job of finding them.

Where does your inspiration for the fun adventures you create for the series come from? My inspiration comes from all of the great mysteries I read when I was a young girl. My favorites were Nancy Drew and Trixie Belden. Although it’s not the approach most authors use, I usually come up with the title first. Then I plan the story around the title.

Have you ever written a book for adults? No, I haven’t. I love reading middle-grade novels, so that is what I feel drawn to write.

Do you find anything challenging when writing for middle-grade children? The only challenge for me is novel length. Despite my best efforts, my books tend to be longer than the average middle-grade book. As far as content, I write about things I would have enjoyed at that age with the hope that today’s middle-graders will enjoy them too.

If you had to compare The Dinswood Chronicles to any other series for kids, what would it be and why? The setting and beginning age of the main characters are similar to the Harry Potter series, but there’s no magic in my stories. I love reading fantasy novels, but that wasn’t my goal in writing. I wanted to craft mysteries similar to those I enjoyed as a middle-grader. I’d say The Dinswood Chronicles are a modern take on series like Nancy Drew, The Hardy Boys, and Trixie Belden.

What’s next in the series? A runaway teenager, a ghost, and escaped prisoners—Emma Higsby really has her hands full in The Phantom of the East Tower, the third installment of the Dinswood Chronicles. When Emma returns to school to begin her freshman year, she finds that a few things have changed. The new gymnasium has been completed and, more importantly, Doug has a new girlfriend. Emma is broken hearted but has to set her feelings aside when strange things begin to happen at the school. The situation becomes even more dangerous when Dean Harwood receives news that two escaped convicts were last seen in the vicinity of the school. Emma’s courage and intelligence are once again put to the test; and she must decide between fact and fiction in order to solve the mystery of The Phantom of the East Tower.

Read an Extended Preview of The Missing Mortals

Ellen Alexander was born and raised in Springfield, Illinois. She attended the University of Illinois and graduated with a bachelor’s degree in microbiology. After graduation, she and her husband Jim moved to Dixon, Missouri, where they raised their three sons. Ellen taught high school chemistry in Dixon for twenty-six years. Now retired, Ellen spends her time writing and enjoying her grandchildren.

To learn more about The Missing Mortals and other titles available from BHC Press, visit our website.