TS Teller discusses her new novel Hidden in Plain Sight and delves into the duel personality of her psychic assassin and what’s next in the series. 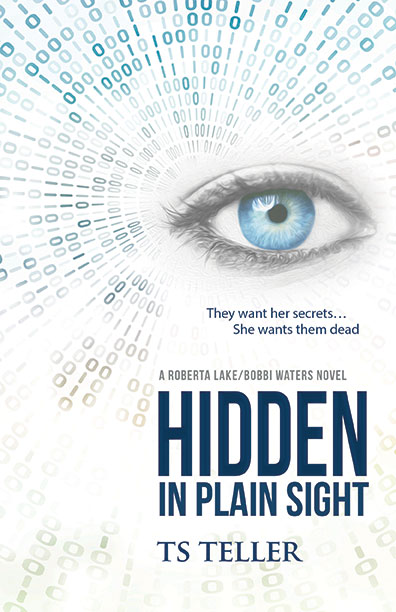 About the book: Computer genius by day, CIA Brain Trust operative & psychic assassin by night, Roberta Lake is unmatched when it comes to mind control, and deadly when necessary. But when her agency turns on her and she becomes the target, she must fight to survive, protect her alter ego, Bobbi, and safeguard her secrets that could put the entire world at risk.

Roberta Lake is not your typical spy. Where did you get the inspiration for a psychic assassin? That is a very good question. I love to write about strong women, flawed women, who rise to their very best. I also believe there is light and darkness in everyone, no matter how pious or how wicked they may appear externally. So, drawing on my own experiences, and pondering the question of how we perceive goodness and wickedness, I began to imagine a person who could be like that proverbial “shark in air.” The idea of creating a wicked assassin, driven by a moral consciousness appealed to me. Roberta was born first, and from her, came the alter-ego, if you will, that could do all the things Roberta could not, nor with a clear conscious, admit to. There is part of me in all my characters, so writing their personalities became rather easy. The hardest part was discovering that moment of transition, when young Roberta discovers the Bobbi within. But I had the help of a good friend who gave me the idea of using a mirror and makeup to differentiate between the two.

Did you do a lot of research about spies and espionage when writing the book? I did a fair bit, again calling on past experience, friends I know, and things I’d read or watched. But as the book is more about the personalities involved, vast research wasn’t as warranted as I first imagined.

“I am intrigued by the world TS Teller has built…I highly recommend it to those who like thrillers and suspense-type novels.” — Elisa Lim, Goodreads Reviewer

Do you like writing the Roberta Lake or the Bobbi Waters parts better and why? Another good question I have thought about a lot. As mentioned, I am part of all the characters I write about it, so digging deep, I was able to draw on both aspects of the two-sided character. Personally, I like the Roberta character the most, as I could develop her more thoroughly, where Bobbi was kept cool and calculating, only using Roberta’s own dark side for certain tasks. It was actually the idea of Roberta having a controllable Bobbi side to herself which gave me the idea for the second novel in the series. Of the two, I much prefer Roberta, but at times imagine, like many might, how wonderful it would be to remove horrible people from existence. So writing Bobbi was very satisfying in its own way!

What is your biggest inspiration when writing? I am inspired by everything I hear and see and experience. I “collect” people’s personalities, experiences and outlooks, especially if they differ from mine, and imagine expanded stories about them. I have an overactive imagination which I credit my mother for, and a clear and concise ability to see whole pictures which is the gift of my father. Both are storytellers in their own right and own style, and I have blended their skills in my life. Imagination is my driving force in everything I do.

What are your three favorite books of all time? I think this is the cruelest question you can ask a person. Three? I have read so much in my life and loved so much more, that to choose three is nigh onto impossible. My two most favorite series in the last twenty years have been JK Rowling’s Harry Potter series and related literature, and Kerry Greenwood’s Miss Fisher books. I love them both for their wonderful styles which do not talk down to the reader (no matter the age!), their fascinating characters, their advanced storylines, the history they weave in, and because both are extremely interesting and intelligent women.

I was captivated right from the start…I really loved this book.” — Sue Henn, Goodreads Reviewer

Tell us something about you that you feel is unique. Unique. Hmmmm. I would say, from my viewpoint, I am fairly ordinary. I have my father’s skill of seeing the greater picture so deal with most situations fairly and justly. In actual fact, I have an overdeveloped sense of justice. I also have my mother’s heart, so use my sense of fairness and equity to deal with situations humanely and honestly, often at my own expense. I love to do spiritual development and consequently have developed a number of skills many people would consider extraordinary…but they are just part of my daily existence. And now part of Roberta’s and Bobbi’s!

What’s next in the series? The second book in the Roberta Lake/Bobbi Waters series (tentatively titled, Silent Knight) builds on the first. For this one, I have had to do a lot more research than the first book, as I decided to use a psychological condition to explain and develop the new antagonist in the book. I have a couple of Doctors of Psychology I am bouncing ideas on, and that has helped a lot. I don’t want to downplay the seriousness of the condition I am utilizing, but I also want to imaginatively expand on it to make the character as dangerous as possible. Roberta/Bobbi is going to be challenged to the very limits of her skills, but in doing so, will discover secrets to herself even she had not imagined possible. But new secrets will appear which she must work even harder to keep from her former employer, the CIA Brain Trust, in order to prevent an army of “herself” from being created.

Read a thrilling excerpt of Hidden in Plain Sight

Originally from Australia, TS Teller is passionate about the environment, being outdoors, trees, nature, and animals. She enjoys meditating, practicing psychic and tarot card work, and lives with a “do no harm” attitude. She resides in Michigan where she is currently working on her next novel.

Visit our website to learn more about Hidden in Plain Sight and other titles available from BHC Press.